Continuing translations of Key Concepts in Intercultural Dialogue, today I am posting KC4: Coordinated Management of Meaning, which Robyn Penman wrote and first published in English in 2014, which Ramin Hajianfard has now translated into Persian.

As always, all Key Concepts are available as free PDFs; just click on the thumbnail to download. Lists of Key Concepts organized chronologically by publication date and number, alphabetically by concept, and by languages into which they have been translated, are available, as is a page of acknowledgments with the names of all authors, translators, and reviewers. 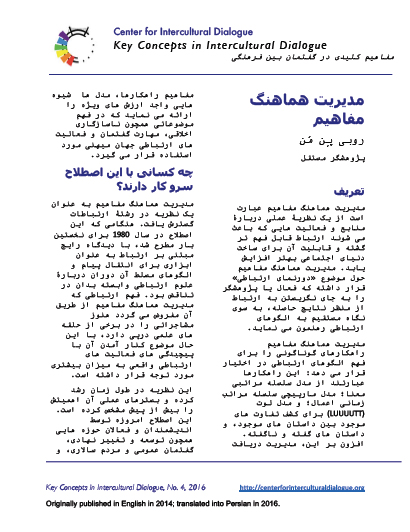 If you are interested in translating one of the Key Concepts, please contact me for approval first because dozens are currently in process. As always, if there is a concept you think should be written up as one of the Key Concepts, whether in English or any other language, propose it. If you are new to CID, please provide a brief resume. This opportunity is open to masters students and above, on the assumption that some familiarity with academic conventions generally, and discussion of intercultural dialogue specifically, are useful.

Robyn Penman (PhD, University of Melbourne) is an independent communication scholar and consultant to government on communication and social policy matters. 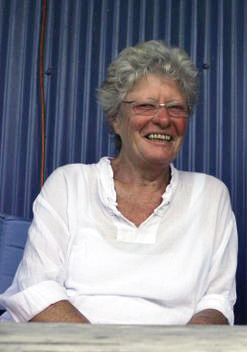 Robyn has focused on explicating an account of how we can make sense of the practice of communicating, while still in the process of communicating, and how we can make judgments about the quality of those practices, while also still in communicating. (eg. “Good theory and good practice: An argument in progress”. Communication Theory, 1992, 2, 234-250). She uses dialogue as an exemplar form of good communicating and has engaged in a range of practical research endeavours to demonstrate the usefulness of her approach and its relevance to important public issues.

She has written on public dialogue (eg. “Voices of the Cupertino community, as heard and reflected upon”. In S. Spano (Ed.) 2001. Public dialogue and participatory democracy: The Cupertino community project. Hampton Press) and the importance of dissent (“Making a place for the practice of dissenting”. In S. Banks (Ed.) 2008. Dissent and the failure of leadership. Edward Elgar Publishing). She has also engaged in an extended research program on communicating in courts and its implications for procedural justice (eg “Goals, games & moral orders: A paradoxical case in court?” In K. Tracy (Ed). 1991. Understanding face-to-face interaction. Lawrence Erlbaum).

In another practical research endeavour, Robyn has successfully demonstrated how an understanding of dialogue as an exemplar form of good communicating is of direct value in better information design practices, especially as applied to the written word (eg “Conversation is the common theme: Understanding talk and text”. Australian Journal of Communication, 1993, 20, 30–43; and R. Penman & D. Sless. (Eds). 1992. Designing information for people. Communication Research Press).

Robyn’s current interests include an inquiry into good communicating in relation to new media and participative democracy. The background for this can be found in her chapter “On being present and participating: Projecting into 21st century media life (In S. Littlejohn & S McNamee (Eds). 2014. The Coordinated Management of Meaning: A festschrift in honor of W. Barnett Pearce. Farleigh Dickson University Press/Rowman & Littlefield). She also continues her broader interest in exploring the quality of communicating in other aspects of public life.

The next issue of Key Concepts in intercultural Dialogue is now available. This is KC4: Coordinated Management of Meaning (CMM) by Robyn Penman. As always, all Key Concepts are available as free PDFs; just click on the thumbnail to download. Lists organized  chronologically by publication date and number, alphabetically by concept in English, and by languages into which they have been translated, are available, as is a page of acknowledgments with the names of all authors, translators, and reviewers.

The Center for Intercultural Dialogue is publishing a series of short briefs describing Key Concepts in intercultural Dialogue. The logic is that different people, working in different countries and disciplines, use different vocabulary to describe their interests, yet these terms overlap. Our goal is to provide some of the assumptions and history attached to each concept for those unfamiliar with it. As there are other concepts you would like to see included, send an email to the series editor, Wendy Leeds-Hurwitz. If there are concepts you would like to prepare, provide a brief explanation of why you think the concept is central to the study of intercultural dialogue, and why you are the obvious person to write up that concept.

In 1980, Barnett Pearce and his colleague, Vern Cronen, published Communication, Action and Meaning, a seminal work introducing scholars to the theory of the coordinated management of meaning (CMM). Over the ensuing decades, CMM theory has continued to grow, reaching a wider and wider audience as the practical and theoretical relevance of Barnett’s work became increasingly acknowledged.

In recognition of Barnett’s outstanding scholarship, a conference, entitled the Transformative Power of Dialogue, was held in his honour in January 2011. The essays in this book collection emerged from that conference. I am one of the contributors to this volume and, as such, this review is more of a commendation than any conventional critical review.

The book opens with an essay written by Barnett shortly before his death, reflecting on what it could take for personal and social revolution to be brought about. As he put it, he has “bet my professional life” on following the risky, high stake path that this evolution “could be promoted by explicit attention to what we are making together in the forms of communication in which we engage” (p. 44).

Barnett’s bet has reaped its rewards, not the least of which is the extent to which he has inspired, encouraged and collaborated with an extraordinary range of scholars and practitioners, a sample of which is contained in the current volume. The very breadth, scholarship and wide-ranging practical import captured in the 15 essays bear witness to the rich offerings to be found in CMM and its broader communication perspective.

For those interested in intercultural dialogue, the central importance placed on dialogue in Barnett’s work, and in the essays in this volume, makes the book especially pertinent. One part of this volume is specifically devoted to the theme of dialogue. The topics include the role of systemic questioning (Victoria Chen), moral conflict and managing difference (Stephen Littlejohn), framing and conflict transformation (Linda Putnam), and generative community dialogue (Stanley Deetz).

Dialogue also emerges as a powerful theme throughout the other parts in the book. For example, I (Penman) consider the core relationship between dialogue and presence and what this means for understanding participation in mediated life. John Lannamann explores the key role of dialogue and its practice in cosmopolitan communication in making better social worlds. And Kim Pearce sums up the volume by talking about the pathway to personal and social evolution in terms of the “life of dialogue…that holds in tension, and compassion, the various stories, actions and people who loves us, or don’t, who are like us. . . . , or aren’t and who may challenge us to the core to remain civil and open” (p. 328).

For anyone interested in dialogue and its role in making better social worlds, this book should be a rewarding read.

Beginning in the summer of 2013, Fitchburg State University in association with the CMM Institute, will offer a Certificate of Advanced Graduate Study in Interdisciplinary Studies: Coordinated Management of Meaning through a combination of distance learning and real-time workshops and seminars. This is a 36 credit program for post-master’s level students. Students will complete 10 courses for a total of 30 credits and then complete a 6 credit thesis that would demonstrate the ability to apply CMM to real-world challenges. The faculty selected for this program are among the leading researchers in the field of CMM research and application. This certificate will be delivered through a combination of distance/online learning (synchronous and asynchronous) and on-campus workshops and seminars.

Career Opportunities
The Coordinated Management of Meaning CAGS program is a post-master’s academic certificate designed for candidates seeking to enhance their professional knowledge and skills. Graduates of this program may elect to go onto existing doctoral level programs that would support CMM as a research methodology.

“CMM has a rich past and has become one of the most important social science theories. More than an interpretive theory, it serves as a practical theory with applicability in many arenas. Students of this program will develop the capacity to help individuals and organizations understand and enhance their communication and action in ways that allow people to form better relationships and ultimately offer solutions to a number of human issues.”
–Dr. John Chetro-Szivos, Graduate Program Chair

HOW TO APPLY
Apply online or request a print application