Francisco Gomes de Matos (a peace linguist, professor emeritus of Linguistics, Federal University of Pernambuco  and president of the Board, ABA Global Education, Recife, Brazil) has created dozens of posters related to peace education, nonviolence, conflict resolution, and related themes, in both English and Portuguese.  (CID has previously published his Cross-cultural Dignity Poem). He feels that “posters can play more than an artistic role / when created to deeply value the human soul.”

One of his posters is included here to provide an example. 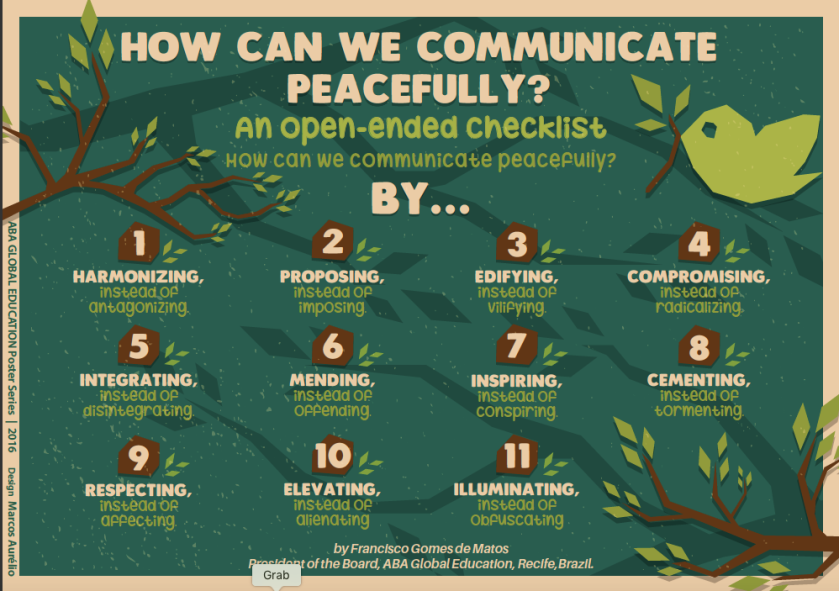 Asked to write about the reasons for creating these posters, Gomes de Matos answered with a poem:

“Posters can have more than  artistic  or business-advertising aims
when they are  created to enhance  intercultural, communicative aims.
When designed and used for  diverse pedagogical purposes
posters become powerful motivators and  creativity generators.
I first used posters to  communicate alliteratively about  PEACE
then decided  to make them a permanent challenge  in my creative agenda.
I believe that  in Second Language Pedagogy, the production of posters should be integrated
so that  multilingually/interculturally, with the aid of  Poster Literacy, millions can be  educated.”
Asked about how he first started creating these posters led to further details:
“My first poster  was created for PEACE AND CONFLICT. Journal of PEACE PSYCHOLOGY. The poster was requested  by the then  journal editor, Milton Schwebel, Rutgers University. The poster, entitled  ABCs of PEACE for children and other peace promoting people, was published  in 2000 as a journal  insert! Given the positive feedback received on that poster, some years later I decided to  probe POSTER MAKING. I have also created posters in Portuguese. One of my posters, THE RIGHT TO PEACE was launched in Geneva on International Day of Peace, at Palais des Nations. You might like to know that  most of my posters in English have been  put together (in 10 thematic categories) as an e-book  entitled  Rhymed Reflections. A Forest of Ideas/Ideals in 2017.”
I hope that others find these posters as interesting as I do.
Wendy Leeds-Hurwitz, Director
Center for Intercultural Dialogue

BASES
1. Objective: Despite the historical disappointments and conflicts are still around, a peaceful world remains as an inalienable imperative, an inescapable moral duty, a possible goal, and a task to perform. Culture, especially literature, can contribute to this based on universal values, and transcending frontiers, traditions, ideologies, and religions. We expect this wish, this special and universal yearn in the hearts of peoples and cultures, can be captured in the writings of the 6th International Poetry Contest of the UPF Argentina, this year under the title “Roads and Bridges for Peace.” The International Day of Peace 2014, established by the UN (Resolution 36/67), joins this event to “commemorate and strengthen the ideals of peace in each nation and each people, and among them.”

2. Formalities: The 6th International Poetry Contest “Roads and Bridges for Peace” is open to writers, poets, students, and every person who feels inspired to express a content of universal value about this topic. Each participant can submit one poem in Spanish, and it must be written in it: author’s name and surname, city, province/state, and country. There should also be a telephone number and an email so as to report the Jury’s evaluation, the winning poems, and other details. The format will be a written poem in verse, which should not exceed one A4 page, letter N° 12. The poem can be sent by email or by post to: Av. Rivadavia 755 – 3° Piso “F” (C1002AAF) – Buenos Aires – Argentina.

5. Jury: Consists of Prof. Bertha Bilbao Richter, literary critic, member of the Hispanic Cultural and Literary Institute (ILCH) and the Argentinian Society of Writers (SADE); Ms. Liria Guedes, writer and Honor Band of the SADE, member of the American Association of Poetry and the ILCH; writer Mabel Fontau, Honor Band of SADE, member of the ILCH and Gente de Letras; poet Donato Perrone, from the Ateneo Poético Argentino “Alfonsina Storni”, Coordinator of the Lyric Space from Café Tortoni, and representative of the Group of Poets Livres de Santa Catarina (Brazil); and a local representative of the Universal Peace Federation (UPF); all of them being Ambassadors for Peace of the UPF. The Jury’s decision is final and it has the right to solve any problem which is not covered by these Bases.

6. Godmothers: The writer and poet Juana Alcira Arancibia, founder and president of the Hispanic Cultural and Literary Institute (ILCH) and director-editor of the prestigious international literary magazine “Alba de América”; the Brazilian poet Marina Fagundes Coello, bilingual writer (Portuguese–Spanish), member of the ILCH, and member of different literary circles of outstanding trajectory in America; and the writer and poet Nélida Pessagno, vice-president of the SADE and Main Counselor of the “El Libro” Foundation.

7. Awards: The winning poem will be read by the author, or by someone they choose, at the Award Ceremony. They will also receive the Certificate of Recognition and the poem will be spread nationally and internationally. It will be also given four Honorable Mentions, five Special Mentions, and two Mentions with its certificates. Each person who receives one of these distinctions will also receive presents, and their poems will be included in the next book edition, as a way of promoting the values of a culture of peace.

8. Award Ceremony: The delivery of awards will take place in the Celebration of the International Day of Peace, in an artistic, cultural, and interreligious event that organizes the Universal Peace Federation (UPF) Argentina according to the UN date (Resolución 36/67), on Monday, September 22, 2014, and whose details will be reported opportunely.

9. Organization: the UPF Argentina, whose mottos worldwide are: “The hope of all times is a unified world of peace” and “A global family centered on God”, organizes this 6th International Poetry Contest, sponsored by the International Educative Foundation (FEI).

In response to the earlier poem posted by Gomes de Matos, Peter Praxmarer (at the University of Lugano, Switzerland) submitted one of his own.

Languages of Peace by Peter Praxmarer

Experts say that they are
between three to six thousand
depending on how one counts
the languages of the world.

The languages of humans
to be more precise.

Plus words and gestures
poses and pauses
voice and noise
layers of meaning behind
underneath and above.

And many more dimensions
variables, categories and types
some hidden some salient
are said to make up culture:
values norms and beliefs
or simply how things are done
plus artifacts and action
tradition, time and space
and how they are perceived and lived
which all are relevant
when cultures or rather
humans interact
in word and deed.

But if one looks a bit more closer
one sees that there are two
two basic types of culture
one of peace and one of violence
one of conflict and one of understanding
one of love and one of hatred
not only as context, situation and moment
may warrant or demand
but in a basic, more elementary way.

Who are the speakers of such a language?
Who her teachers, who her students?
Who her creators, who her developers,
And who those who cannot bear her prosody
nor listen to her words?

As elaboration on this poem, he offers this quote:

The following is a poster poem on Crosscultural Dignity sent in by Francisco Cardosa Gomes de Matos, a peace linguist-educator from Recife, Brazil. He is Professor Emeritus of Linguistics, Federal University of Pernambuco, co-founder and current President of the Board of Associação Brasil América, and co-founder of The World Dignity University initiative. If others have poems they would like to submit, we will consider posting them as well!

[NOTE: Occasionally an author of fiction or a poet gets right to the heart of intercultural dialogue. One such example follows. If you have other suggestions, post links as comments.]

Gate A-4
by Naomi Shihab Nye

Wandering around the Albuquerque Airport Terminal, after learning
my flight had been delayed for four hours, I heard an announcement:
“If anyone in the vicinity of Gate A-4 understands any Arabic, please
come to the gate immediately.”

Well–one pauses these days. Gate A-4 was my own gate. I went there.

An older woman in full traditional Palestinian embroidered dress, just
like my grandma wore, was crumpled to the floor, wailing loudly. “Help,”
said the flight service person. “Talk to her. What is her problem? We
told her the flight was going to be late and she did this.”

I stooped to put my arm around the woman and spoke to her haltingly.
“Shu-dow-a, Shu-bid-uck Habibti? Stani schway, Min fadlick, Shu-bit-
se-wee?” The minute she heard any words she knew, however poorly
used, she stopped crying. She thought the flight had been cancelled
entirely. She needed to be in El Paso for major medical treatment the
next day. I said, “No, we’re fine, you’ll get there, just later, who is
picking you up? Let’s call him.”

. . .
And I looked around that gate of late and weary ones and I thought, This
is the world I want to live in. The shared world. Not a single person in that
gate–once the crying of confusion stopped–seemed apprehensive about
any other person. They took the cookies. I wanted to hug all those other
women, too.

This can still happen anywhere. Not everything is lost.

[The full poem can be read here]