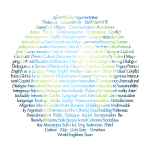 The Center for Intercultural Dialogue began publishing the series Key Concepts in Intercultural Dialogue in 2014. The following is a list of all concepts published to date, organized alphabetically by concept. (The concepts drawn from other languages are described in English.) Click on the name of the concept that interests you to see and download that PDF. As this series is licensed under a Creative Commons Attribution-NonCommercial-NoDerivatives 4.0 International License, you are welcome to not only use any of the concepts in your own teaching and practice, but also to share them with your students.

As there are additional concepts you would like to see included, send an email to the series editor, Wendy Leeds-Hurwitz. If there are concepts you would like to prepare, provide a brief explanation of why you think the concept is central to the study of intercultural dialogue, and why you are the obvious person to write up that concept. Feel free to propose concepts drawn from any language, especially if they expand our ability to discuss an aspect of intercultural dialogue that is not easy to translate into English. If you would like to translate one or more of the key concepts into any language other than English, send an email about that.

Lists of Key Concepts organized chronologically by publication date and number, and by languages into which they have been translated, are also available, as is a page of acknowledgments with the names of all authors, translators, and reviewers.

NOTE for students: As these are written by faculty members or advanced graduate students, they may be used as resources in academic papers (unless your professor in a particular course tells you otherwise). The citation format in APA for a concept published in English would be:
• Leeds-Hurwitz, W. (2014). Intercultural dialogue. Key Concepts in Intercultural Dialogue, 1. Available from:
https://centerforinterculturaldialogue.files.wordpress.com/2014/02/key-concept-intercultural-dialogue1.pdf

There are many, many other publications relevant to intercultural dialogue. As we notice these, they are added to the list of Readings in ICD posted to this website. If you would like to nominate some of your own publications, or those you are reading, to be added to the list, send an email. We occasionally publish book notes, so if you wish to write one, let us know which book, and what you perceive as its relevance to intercultural dialogue.