As described a week ago, some of the Key Concepts in Intercultural Dialogue are being translated into other languages than English. Today I am posting KC12: Third Culture Kids (TCKs), originally written in English in 2014, and now translated into Indonesian, by Anastasia Aldelina Lijadi, of the University of Macau.

All Key Concepts are available as free PDFs; just click on the thumbnail to download. Lists of Key Concepts organized chronologically by publication date and number, alphabetically by concept, and by languages into which they have been translated, are available, as is a page of acknowledgments with the names of all authors, translators, and reviewers. 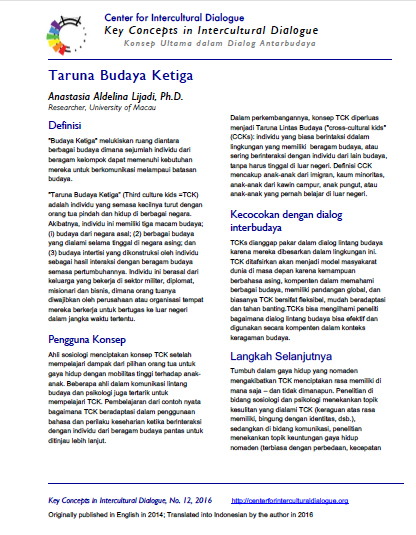 Rather than arranging for translation of all concepts into one language at a time, given the diversity of authors, it seems most appropriate to let each author translate their own work into their own languages. Several scholars who were not part of this original group have already written to ask permission to translate concepts, which will expand the number of translations for each concept. This may come across as a little disorganized, especially at the start when only a few translations appear. However, for ideological reasons, it seems the best choice. And it certainly has been a popular decision: I have never received so many offers to do so much work so quickly in response to a request!

If you are interested in translating one of the Key Concepts, please contact me for approval first because several dozen are currently in process. And, as always, if there is a concept you think should be written up as one of the Key Concepts, whether in English or any other language, propose it. As of this writing, 78 have been published in English, but words from Chinese, Portuguese, Japanese, Spanish, Belarusian, German and Arabic have also been introduced (with the discussion provided in English). As of this writing, I have received offers to translate one or more concepts into Arabic, Belarusian, Chinese, Finnish, French, German, Italian, Japanese, Kapampangan, Polish, Portuguese, Russian, Spanish and Tagalog (in alphabetical order). There is even a possibility of videos presenting American Sign Language versions. So if anyone else wants to join in the fun, just let me know.