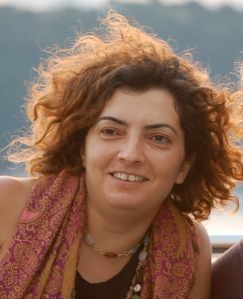 During her work years at Maltepe University, she was involved in the organization of NCA Summer Conference on Intercultural Dialogue with Wendy Leeds-Hurwitz. Among many outcomes of that Conference was the establishment of this Center for Intercultural Dialogue in 2010. Since the founding, she has served on the CID Advisory Board. In addition, she served as co-editor, with Prue Holmes, of the collection, Case Studies in Intercultural Dialogue published by Kendall Hunt in 2014. She is particularly interested in collaborative research on the practices of critical media pedagogy in various contexts and  the relationship between radio, gender and identity, has participated in the development of various media projects with street-involved children and youngsters, and serves as a Board Member of the Research and Implementation Center on Street Children (SOYAÇ) at Maltepe University as well as a member of Women’s Radio in Europe Network (WREN).

Currently, she has been working towards the completion of an oral history project with women radio producers of TRT (Turkish Radio and Television) from 1960s to 1990s. Her recent publications appear in Transnationalizing Radio Research: New Approaches to Old Media (edited by Golo Föllmer and Alexander Badenoch, Transcript Verlag Publications, 2018), The Wiley Blackwell-ICA International Encyclopedia of Intercultural Communication and Feminist Media Histories Journal. Haydari holds a Ph.D. in Communications and MAIA in Communication and Development from Ohio University, USA.

Nazan Haydari served on the Organizing Committee, and then was the Local Arrangements Chair for the National Communication Association’s Summer Conference on Intercultural Dialogue in Istanbul, Turkey, which led to the creation of CID. She co-edited the book resulting from that event, Case Studies in Intercultural Dialogue. She is a member of the CID Advisory Board.

In addition, she served as a reviewer of micro-grants distributed by CID (funded by the National Communication Association), and has been a reviewer for translations into Turkish. She also helped to organize and moderate the CID/UNESCO focus groups for the Futures of Education Initiative.