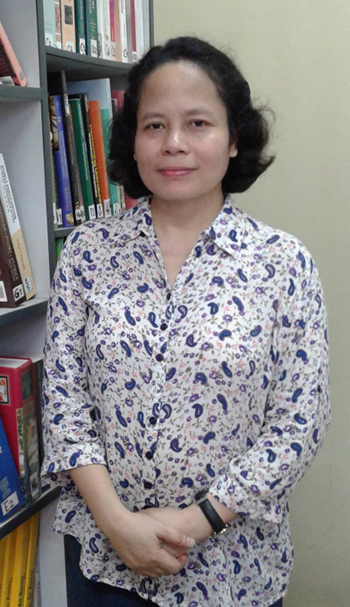 She has published research articles in local and international communication and literary journals on transnational audience reception of Korean television dramas; communication, civil society groups, the public sphere, and governance; intercultural communication between Christians and Muslims in the Philippines; Islamophobia and negative media portrayal of Islam; and literary critical essays. She has also written essays on the ideology of peace; reviews of the books of Maulana Wahiddudin Khan, an Islamic teacher advocating for peace; and her reflections on life, society, and spirituality published in newageislam.com, globalresearch.ca, and metrocebunews.com.

She has spoken in seminars for teachers about peace education, violence and conflict resolution and has been a resource speaker to Episcopalian priests on the use of communication for evangelization and to Philippine soldiers and military officers on purpose-driven life and goal-setting. She holds a Bachelor in Secondary Education degree with a major in English, a Master of Arts degree in Comparative Literature, and a Doctor of Philosophy degree in Communication from the University of the Philippines in Diliman, Quezon City.

Espiritu, B. F. (2017). The Lumad struggle for social and environmental justice: Alternative media in a socioenvironmental movement in the Philippines. Journal of Alternative and Community Media, 2, 45-59.

Espiritu, B. F. (2015, July 18). The Battle against GMOs in the Philippines: Confronting the WTO’s Attempts to Destabilize Sustainable Agriculture. Global Research.

Espiritu, B. F. (2015, May 6). How to Have Peace in the Holy Land: Implications for Interfaith Dialogue. New Age Islam.

Espiritu, B. F. (2015, April 3). Islamophobia and the “Negative Media Portrayal of Muslims”: An Exposition of Sufism, A Critique of the Alleged “Clash of Civilizations”. Global Research.

Espiritu, B. F. (2015, March 14). The Destructive Impacts of Corporate Mining in the Philippines: The Tampakan Copper-Gold Mining Project in Mindanao. Global Research.

Espiritu, B.F. (2004). The cry of the poor and the oppressed: Theodicy and existentialism in the historical and socio-political contexts of Francisco Sionil Jose’s novels. KINAADMAN: A Journal of Southern Philippines, 26.

Espiritu, B. F. (2004). A call to subversion: Women’s disempowerment and empowerment in Lina Espina Moore’s Heart of the Lotus and other novels”, in Interdisciplinary Literary Studies: A Journal of Criticism and Theory, 6(1), 21-36.

Espiritu, B. F. (2001). From journey to journey: Identity and nationhood in F. Sionil Jose’s Po-on and Viajero. Danyag: Journal of Humanities and the Social Sciences of the University of the Philippines in the Visayas, 6(2), 211-232.