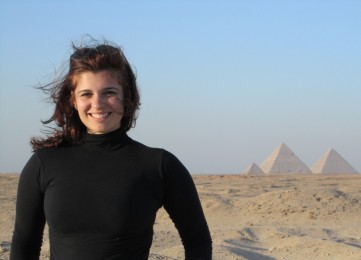 Rosanne Teniente has been awarded a micro grant for international travel, funded by the Association for Business Communication through the Center for Intercultural Dialogue. The following is her description of herself and the project. You can also read the main article describing all award winners.

I am a Rhode Island native who has been transplanted around the world. As an undergraduate at Simmons College in Boston, MA, I studied economics and international relations, focusing on development economics and Middle Eastern politics.  After my undergraduate studies, I moved to Egypt for several years as a Gilman Scholar at the American University in Cairo studying Arabic and interned with the US Foreign Commercial Service, and then worked as an English instructor at an international school.  I am now a master’s candidate in the public administration program at Northeastern University, while working in the field of social services.  I currently reside in Southwest New Mexico with my husband who is serving in the US Air Force.  I embrace new adventures, foreign languages, and cross-cultural learning experiences.

With the support of the CID grant as well as Northeastern University, I will be traveling to Baar, Switzerland to attend a ten-day conference in August hosted by the Institute for Peace and Dialogue, a nongovernment organization that is dedicated to strengthening institutional dialogue between civil societies, international peace and state institutions. The conference is IPD’s International Summer Academy in Peace-building & Intercultural Dialogue, which will feature experts and practitioners in the field of conflict resolution and peace building. Through different workshops, lectures, interactive group work, and negotiation activities, the knowledge gleaned with help me to build upon my past empirical research on the effect of conflict on GDP per capita in developing countries.

September 2014: This project is now complete, and Teniente’s final report is now available.