Dr. Federico Subervi-Vélez is currently, Co-Editor-in-Chief of The Oxford Encyclopedia of Race, Ethnicity and Communication (scheduled for publication in 2022), and Honorary Associate/Fellow of the Latin American, Caribbean and Iberian Studies Program at the University of Wisconsin-Madison. 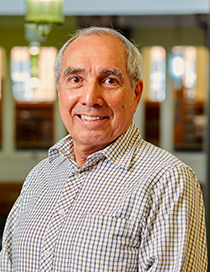 His previous academic job was as Full Professor at the School of Journalism & Mass Communication and as Provost Faculty Associate for Diversity, Equity and Inclusion at Kent State University in Ohio, where he helped develop the College of Communication and Information doctoral program while continuing his research about Latinos and media issues. Prior to that, he was Full Professor and Director of the Center for the Study of Latino Media and Markets at the School of Journalism and Mass Communication, Texas State University. He’s also been a professor at the University of Texas at Austin, and the University of California at Santa Barbara.

Subervi-Vélez earned his BA in Social Sciences and his MA in Public Communication from the University of Puerto Rico, Río Piedras campus. His Ph.D. in Mass Communication was earned at the University of Wisconsin-Madison. Since the early 1980s, he has been conducting research, publishing and teaching on a broad range of issues related to the mass media and ethnic minorities, especially Latinos in the United States. In addition to more than fifty journal articles, essays, book chapters and reports on these subjects, he is the editor and an author of the book The Mass Media and Latino Politics.  Studies of U.S. Media Content, Campaign Strategies and Survey Research: 1984-2004 (NY: Routledge, 2008).

From his home in Austin, Subervi-Vélez divides his time between his duties as member of the Advisory Board of ¡Boricua!, an emerging Internet radio organization, and as member of the Advisory Council of Child Trends’ Hispanic Institute.  He also serves on the editorial boards for Journalism & Mass Communication Quarterly, Journalism Educator, The Howard Journal of Communications, the Revista Latinoameriana de Ciencias de la Comunicación, and Cuadernos Inter.C.A.Mbio Sobre Centroamérica y el Caribe.

In 2015 he was founding member and president of the Association of Latino Media, Markets & Communication Research. From 2013-2019, he served on the Board of Directors of the Latino Public Radio Consortium, for which he held the post of Secretary for three years.  In 2017, he also served on the Board of Directors of the National Association for Media Literacy Education.  To help the Latino community in Texas, he worked as Chair of the Board of Directors of Latinitas, Inc., a non-profit organization whose vision is to empower Latino youth through media and technology, an organization that had its genesis in 2002 in one of Subervi-Vélez’s classes at the University of Texas.

Based on his lifelong work on diversity research and teaching, in 2012, the Association for Education in Journalism & Mass Communication honored him with the Lionel L. Barrow, Jr. Award for Distinguished Achievement in Diversity Research and Education. In 2017, the National Association of Hispanic Journalists also recognized his teaching, research and community service by inducting him into the organization’s Hall of Fame.

One of his most recent publications, co-authored with Tania Cantrell Rosas-Moreno, is titled “The Imperative of Latino-Oriented Media and News Literacy,” (pp. 109-119) in W.G. Christ & B.S. De Abreu (Eds.), Media Literacy in a Disruptive Media Environment, (2020, Routledge).

Work for CID: Federico Subervi-Vélez serves on the CID Advisory Board, and also serves as a reviewer for Spanish translations.