Zvi Bekerman, Ph.D. teaches anthropology of education at the School of Education and The Melton Center, Hebrew University of Jerusalem. He is also a Research Fellow at the Truman Institute for the Advancement of Peace, Hebrew University and a faculty member of the Mandel Leadership Institute. 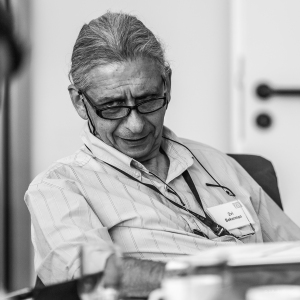 His main interests are in the study of cultural, ethnic and national identity, including identity processes and negotiation during intercultural encounters and in formal/informal learning contexts. His recent research has focused on the different ways in which adults/teachers and children manage communication conductive to identity construction and negotiation and the relevance attached to identity construction and negotiation in educational contexts in general and more specifically educational contexts in conflict ridden societies.

Since 1999 he has been conducting a long term ethnographic research project in the integrated/bilingual Palestinian-Jewish schools in Israel. He has also recently become involved in the study of identity construction and development in educational computer-mediated environments. In brief, his interests lie in human learning processes, their development, and practice, both in formal/informal and real/virtual environments. He has published numerous papers in these fields of study and is the Editor (with Seonaigh MacPherson) of the refereed journal Diaspora, Indigenous, ad Minority Education: An International Journal (Routledge, 2007). Among his recently published books: with Michalinos Zembylas, Psychologized language in education: Denaturalizing a regime of truth (Palgrave Macmillan, 2018); The Promise of Integrated, Multicultural, and Bilingual Education: Inclusive Palestinian-Arab and Jewish Schools in Israel (Oxford University Press, 2016); with Diana Silberman-Keller, Henry A. Giroux, and Nicholas Burbules, Mirror Images: Popular Culture and Education (2008); with Nicholas Burbules and Diana Keller Silverman, an edited volume entitled: Learning in Places: The Informal Education Reader (Peter Lang, 2006); with Claire McGlynn a volume entitled Addressing Ethnic Conflict through Peace Education: International Perspectives (Palgrave McMillan, 2007); and with Ezra Kopelowitz Cultural Education-Cultural Sustainability: Minority, Diaspora, Indigenous and Ethno-Religious Groups in Multicultural Societies (Routledge, 2008).

He can be reached via email.